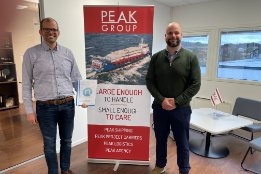 Peak Marine Tech AS has awarded Norwegian Electric Systems AS (NES) a contract to supply the battery and control systems. Image Credit: NES

Cable laying vessel Fjord Connector, owned by Seaworks Kabel AS., is set to become another example of how owners are embracing marine battery technology to reduce their traditional oil bunker consumption.

While marine battery technology is advancing, cost and energy density limitations mean that for the majority of vessels a conversion to 100% operation on battery power is currently impractical.

But as the Fjord Connector will demonstrate, battery technology is at the point where it can still make a meaningful impact on bunker consumption and the associated emissions.

The Fjord Connector is currently undergoing conversion from a seismic support vessel to a cable laying vessel designed for installation of fibreoptic subsea cables.

because the lowest load on the diesel engine often produces more energy than what the vessel requires, this also means that energy is wasted

The conversion will include the installation of a large battery pack and infrastructure allowing the vessel to charge its batteries quayside at night.

Norwegian Electric Systems AS (NES) has been contracted to supply the battery and control systems.

One complete, the Fjord Connector will use a combination of oil bunkers and battery power when sailing offshore, and then switch to 100% battery power while on site laying cables.

In addition to on-site emissions reduction, real energy savings will be realized thanks to the increased efficiency of the battery power system.

"Normally when a vessel installs subsea cables, its diesel engine(s) are running in order to have power to support all on-board systems. But because the lowest load on the diesel engine often produces more energy than what the vessel requires, this also means that energy is wasted," a spokesperson for NES explained to Ship & Bunker.

The vessel's lifecycle energy and emissions savings will thus be a function of the energy savings from the battery system vs diesel generators, and how the electricity to charge the battery is generated.

NES is set to supply the equipment in the second quarter of 2022.

The firm has joined Tokai University and Akishima Laboratories in a study aimed at optimising the hull shape for wind-powered vessels.