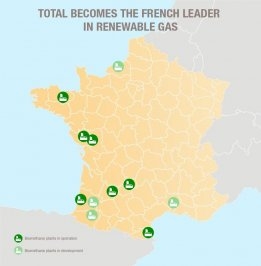 French energy company Total's acquisition of a major biogas producer in the country will help boost its ability to supply bio-LNG as a marine fuel, according to the head of its bunkering unit.

On Monday Total announced the acquisition of Fonroche Biogaz, the largest producer of renewable gas in France. The company now plans to produce 4-6 TWh/year of biomethane by 2030.

"This is an important step forward for us to realise bio-LNG as a real marine fuel solution for shipping's decarbonisation," Jerome Leprince-Ringuet, managing director of bunkering unit Total Marine Fuels Global Solutions, said in a LinkedIn post Tuesday.

LNG has grown rapidly as an alternative bunker fuel in recent years. But while the carbon dioxide emissions reduction seen from using LNG may be enough to meet the IMO's decarbonisation targets for 2030, it will not be sufficient to meet the 2050 goal of halving the shipping industry's total emissions.

Bio-LNG and synthetic LNG produced using renewable power could gradually be blended with conventional fossil LNG to help shipping meet that tougher target, and this could be done using the current generation of gas-powered ships.

For the first bunkering at Rotterdam of CMA CGM's giant new gas-powered container ship the CMA CGM Jacques Saadéin November, Total supplied biogas for about 13% of the 17,300 m3 of LNG it delivered to the ship. But the company said this was a one-off, rather than a regular part of the ship's supply contract.

The company's focus is bitumen, base oils, bunkering and petroleum products trading.