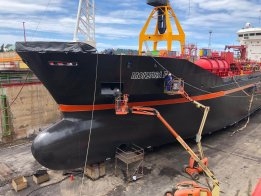 The work on the Monjasa Provider was carried out recently in Spain. Image Credit: Monjasa

Bunker supplier Monjasa is in the middle of renaming and redesigning its fleet of tankers, the company said Thursday.

The Monjasa Provider was the most recent of the ships to have the work done, during a survey in Spain before returning to operations in the English Channel.

Uptake numbers may be small, but they highlight an undeniable shift in thinking among shipowners.