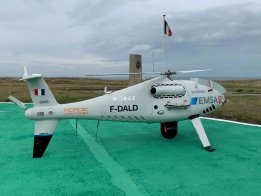 France's government has deployed a sniffer drone at Calais to test for compliance with the 0.1% sulfur limit on marine fuels in the area, according to the European Maritime Safety Agency (EMSA).

The drone's operation started on September 23 and will last for three months, EMSA said in a statement on its website last week.

The information gathered by sniffer drones is not in itself used to prosecute shipowners for sulfur breaches, but is used to inform port authorities about which ships should be inspected.

"If the emissions measurement taken by the drone reveals a breach in the concentration limit, a subsequent ship inspection may be triggered at the next port of call," EMSA said.

"EU member states are informed of these breaches to facilitate the coordination of the ship inspections among them."

After the retrofit the three converted ferries will operate on the Drag-Kjøpsvik and Bognes-Skarberget routes in Norway from December 1, 2022.

Dominique Philibert, previously technology director since 2013, took over as president and COO as of July 1.

The Sapref refinery near Durban, run jointly by Shell and BP, began to restart production on July 21.