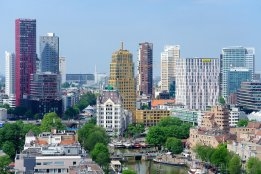 Liquefied natural gas could grab a 10% share of the Rotterdam bunker market within six years, a port official has said.

Although 9,500 metric tonnes (mt) of LNG bunker were supplied in the port last year, the figure should reach 30,000 mt for 2019, port director Maud Eijgendaal was reported saying by Reuters.

First half-year sales of LNG bunkers were over 11,000 mt.

"If we keep up this growth, we can reach a million tonnes by 2025-2030, which would be around 10% of all bunker fuels sold in Rotterdam," Eijgendaal was quoted as saying.

By next year, the Dutch transshipment and bunkering hub should have seven or eight LNG bunker tankers in operation.

"That is a strong signal that there is a lot of demand."

"It looks promising," she said.

LNG is seen in the industry as a viable alternative to oil-derived fuel oil which is the most common form of bunker fuel used by the global shipping fleet.

And while the lack of supply infrastructure for LNG marine fuel is a block on its development, northwest Europe is seen as having strong potential for demand growth.

In a move first reported by Ship & Bunker two weeks ago, the company has taken on Lars Doering, Karsten Kurth and Oliver Grunau in Hamburg, and Anthi Tsahilidou, Alex Anagnostopoulos and Yiannis Vassilatos in Athens.