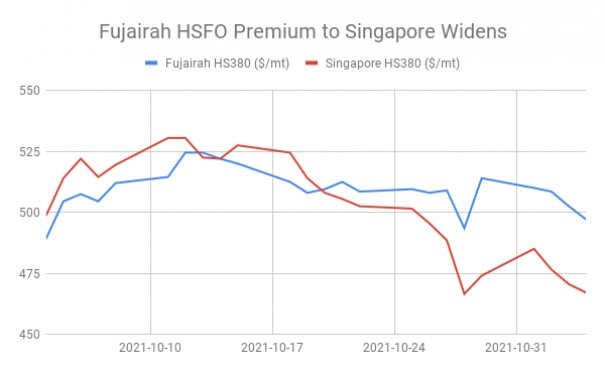 Tightness in the Fujairah HSFO market has left its premium to Singapore's prices at the widest level in 18 months.

HSFO at Fujairah stood at $502.50/mt on Wednesday, according to Ship & Bunker pricing, $32/mt higher than Singapore's level. The spread was the widest since June 2020.

In a panel appearance at the IBIA annual convention this week Colin Holloway, the Dubai-based head of technical at Cockett Marine Oil, said few suppliers at Fujairah were currently able to offer HSFO, but that the problem was likely to be temporary with more planning to take on supplies soon.

A total of five suppliers currently offer HSFO at the Middle Eastern hub, Holloway added, up from a recent low of three suppliers and with more expected to join the market if demand continues to rise.

Meanwhile, Russia continues to profit despite sanctions from the West.

ONE Reports 14.7% Drop in Bunker Consumption in First Quarter