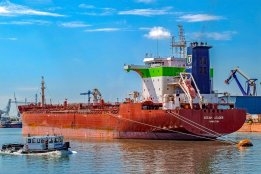 Liquified natural gas (LNG) bunker fuel should increase its market presence in the second half of the decade, a top commodity executive has said.

In a pre-recorded interview for the Platts APPEC event, Vitol's chief executive, Russell Hardy said that use of LNG as marine bunker fuel is expected to gain traction around 2025 and 2030, according to Reuters.

The executive noted that despite ammonia's slow start, the first vessel using the alternative bunker fuel is expected to sail in 2024.

According to Hardy, carbon dioxide could emerge as a new physical commodity especially in Europe as more firms engage in the business of its capture, transport and storage.

The latest data from Society for Gas as a Marine Fuel (SGMF) indicates there are currently 210 LNG-fuelled ships in operation and a further 374 on order.

Crossing Sea of Japan and docking under drone guidance.

The company has installed the system on board the MGO barge Mabel.

A heated phone call between Energy Petrol's Mustafa Muhtaroglu and the captain of the bulker M/V Ruby followed a dispute over sampling paperwork.