Removing Ever Given From Suez Canal May Take 'Weeks': Boskalis 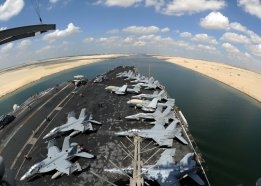 The Suez Canal is now in its third day of closure. File Image / Pixabay

Removing the 20,000 TEU container ship that is blocking traffic through the Suez Canal may take weeks, according to the firm tasked with shifting it.

Dredging company Boskalis believes it is too early to tell how long the job might take, news agency Reuters reported on Thursday, citing comments from CEO Peter Berdowski.

"We can's exclude it might take weeks, depending on the situation," Reuters cited Berdowski as saying.

Containers, oil and water may need to be removed from the ship as tugs work on moving it, Berdowski said.

Traffic on the Suez Canal has been halted in both directions since Evergreen Marine's ship the Ever Given ran aground on Tuesday morning.

The company detected the attack on November 20.

The two firms have decided to establish 'a long-term strategic and industrial cooperation focused on the production of decarbonized fuels'.