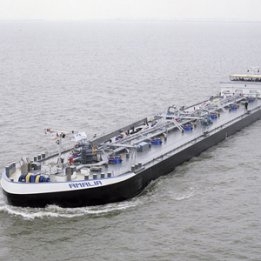 The firm is considering rolling out the delivery measurement systems to more of its barges. Image Credit: Trefoil Trading

Marine fuels firm Trefoil Trading has installed a mass flow meter on board one of its barges at the Amsterdam-Rotterdam-Antwerp hub.

The company has installed the system on board the MGO barge Mabel, it said in an emailed statement on Wednesday. The firm is considering rolling out the delivery measurement systems to more of its barges 'in the very near future', it said.

"It is a proven fact that the receiving vessel's tank soundings are often incorrect, as their bunker tanks are not calibrated and external issues such as trim and list during delivery on the receiving side can interfere the correctness of the findings, which of course causes discussions about the received quantities," the company said in the statement.

"To avoid such discussions the MFM is a great solution as its findings are always correct.

"Furthermore, it will save everybody a lot of time, and on top of that it avoids unnecessary risks for ship crew members in embarking and disembarking the delivering barge.

"As an extra bonus the MFM can save both supplier and receiver massively on surveyor costs."

Mass flow meters have now been required for all bunker deliveries in Singapore for several years. The requirement has done much to reduce bunker quantity disputes at the world's largest marine fuels hub, although recent cases have shown the systems can sometimes be tampered with.

Other port authorities have been slow to follow Singapore's example in making the systems compulsory, but several bunker suppliers are now voluntarily installing them in barges around the world.

HSFO Contamination Discovery May Have Been Too Late for Quality Claims: Gard

Because this contamination was found only after extensive testing, there may not have been enough time for quality claims.

The firm has taken delivery of the 7,994 DWT barge Margherita Cosulich.