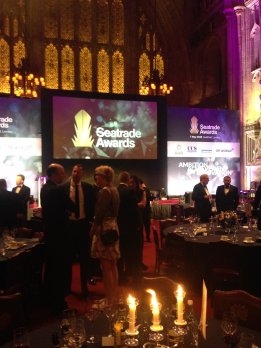 The award -- for contributions to saving fuel or using new forms of marine fuel -- was for the company's e-shuttle tanker concept.

The ships -- six are being built for delivery this year and next -- incorporate a volatile organic compounds (VOC) recovery system which converts VOC emissions into liquid gas.

Speaking to Ship and Bunker at the event, vice-president for strategic development Niranjan Dhurandhar said the ship's design developed at Teekay could have a wider application. "That's the direction the industry is moving in," he said. "We were the first movers in the shuttles but you are seeing it other sectors."

The ships, however, do not come cheap as building costs are significantly higher. "But we are investing for the long-term," Dhurandhar said.

In a week when shipping's emissions are in the spotlight at the latest marine environment protection committee meeting (MEPC74), the green credentials of the technology seem to be beyond doubt.

VOCs contribute to atmospheric pollution. Emitted into the air from products and processes, they form other air pollutants such as tropospheric ozone, a major component of smog and, therefore, a danger to human health. Tropospheric ozone exposure is responsible for an estimated one million premature deaths each year globally, according to environmentalists.

But regulators are responding to the threat. In the European Union, for example, countries are legally obliged to reduce their national emissions of VOCs through the National Emission Ceilings Directive.

On weak refining margins related to the Covid-19 pandemic.