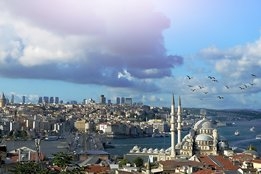 The Turkish bunker market has enjoyed another year of growth, with Istanbul's annual sales volume rising to 2,955,050 metric tonnes (mt) for 2018.

The performance represents an increase of 5% over the 2,794,573 mt sold last year, according to data from Turkey's Energy Market Regulatory Authority (EMRA).

"It supplies most volume and the most number of ships among all supply ports in the area, including Russia, Greece, Israel, Egypt, Italy, and Malta," he told Ship & Bunker.

local suppliers have over 500,000 tones of storage capacity and over 60 modern bunker barges

Muhtaroğlu sees reliability and quality as a key factors behind the growth, saying the market benefits from a number of infrastructure advantages such as all barges being loaded by MFM and high levels of product testing.

Collectively, the local suppliers have over 500,000 tones of storage capacity and over 60 modern bunker barges that perform some 12,000 vessel bunkerings per year, he adds.

And as part of efforts to ensure its success continues, as reported last year, a number of local players have also come together to form the IstanbulBunker2020 Committee to work on preparing for the upcoming IMO 2020 global 0.50% sulfur cap on marine fuel.