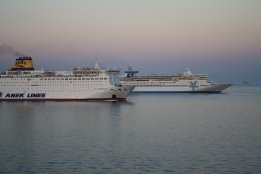 The seemingly unstoppable rise in prices in the current market is preying on the mind of bunker players, visitors to the Greek shipping event of Posidonia have heard.

Bunker players speaking at Posidonia event last week were wondering where the price might settle.

While demand had shifted away from Russian destinations to the benefit of other ports, the upward pressure on prices was unpredictable, according to maritine news provider Port News..

"We are in unchartered territory," Alexander Prokopakis, the head of Probunkers, was quoted as saying. And he suggested that if the price level for bunkers went above $1,200 a metric tonne it would have a "detrimental ripple effect across the entire shipping industry".

The cost of lubricant oil has also added to a vessel's operating costs.

"The total journey cost has skyrocketed," said Balucos' commercial manager John Stavropoulos. This is in turn is squeezing credit lines as operators must pay twice what they did before the crisis for the same volume of fuel.

And the glum news on bunker prices has reached other parts of marine fuels sector.

Gulf Oil Marine's chief executive, David Price, said that lubricants were up by around 20% with further increases likely by the end of the year.

The firm is looking for candidates with two to five years of experience and a relevant degree in finance or economics at a master's level.

The decision was taken at extraordinary general meetings for each of the companies on June 20.