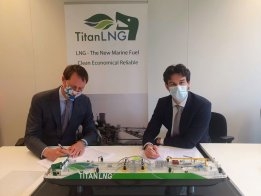 The gas company will receive €11 million ($12.9 million) from the EU's Connecting Europe Facility after a virtual signing ceremony held this week.

"We have kickstarted the preparations for our Bio2Bunker project to expand the BioLNG and E-LNG bunkering supply chain by introducing three bunker barges in Rotterdam, Zeebrugge, and Lübeck," the company said in a LinkedIn post Wednesday.

The company first announced the subsidy in June. The project will allow the company significantly to expand its LNG bunker barge fleet in the Netherlands, Belgium and Germany, which could eventually be used to deliver bio-LNG and synthetic LNG at Northwest European ports.

The firm appointed Xie Wenyan as CEO as of the start of 2021.