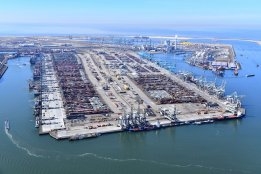 The experiment was carried out over a month at a terminal in Rotterdam. Image Credit: Port of Rotterdam

Improved efficiency of port operations can cut a vessel's fuel bill by 8-9%, according to research from the Port of Rotterdam.

The port authority conducted an exercise of just-in-time (JIT) port arrivals in conjunction with the International Maritime Organization and shipping companies Maersk and MSC, it said in a statement on its website Monday.

The participants tested 26 ships at a single Rotterdam terminal over a month, giving either 12 or 24 hours' notice of when to arrive at the pilot boarding place. The ships given 12 hours were able to cut their fuel consumption by 9% in the notice period as they optimised speed, and those given 24 hours were able to cut consumption by 8% in that period.

"JIT operations have the potential to cut the time ships spend idling outside ports and help reduce harmful emissions," the Port of Rotterdam said in the statement.

"This can be achieved by communicating in advance the relevant information to the ship about the requested time of arrival - allowing the ship to adjust to optimum speed."

INSIDER INSIGHT: Happy Friday. Or, How to Maximize Your Margin as a Trader

Our industry insider discusses how an honest piece of information can be turned into a lucrative advantage.