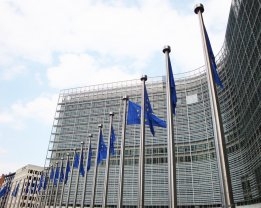 Draft plans have been leaked from the European Commission. File Image / Pixabay

The European Union appears to be taking a softer approach than expected with its plans to regulate emissions from shipping, applying its emissions trading system only to emissions within its borders at first.

A leaked draft of the European Commission's plans shows the current commitment is only to bring intra-EU voyages into the EU-ETS, where previously it had been suggested that any voyage including an EU port would be affected.

The change will come as a relief to most of the global shipping industry. Container shipping industry group the World Shipping Council published a white paper earlier this month calling the prospect of the EU regulating voyages outside its waters "an unprecedented degree of control over extraterritorial waters" that could add as much as 3.45 billion euros to annual trade costs.

The European Commission has not yet given up on regulating voyages beyond waters, but will "give fresh political consideration" to international factors in regulating aviation and shipping emissions, according to the draft plans.

The firm is looking for candidates with a bachelor's degree in finance or accounting and one to three years of experience in a corporate or business setting.

An unexpected disruption to the methanol market comes as a reminder of the increasingly complex supply chains shipowners face in the decarbonisation era.