Inland Container Ship Planned to Run on Hydrogen by December 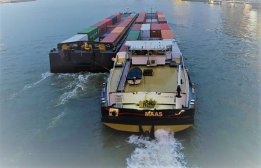 The Maas will resume operations between Rotterdam and Antwerp after its retrofit. Image Credit: Future Proof Shipping

Shipping company Future Proof Shipping plans to convert one of its inland container ships to run on hydrogen as soon as the end of this year.

The firm will work with Holland Shipyards Group to retrofit the 110m * 11.45m vessel the Maas at the Hardinxveld shipyard later this year, it said in an emailed statement on Wednesday.

The company expects the ship to be running on hydrogen by December.

"This will consist of electric motors, hydrogen tanks, a PEM fuel cell system (necessary for converting hydrogen into electricity) and a battery system.

"The compressed hydrogen tanks, the fuel cells and the battery system are separate units that can be removed for maintenance or replacement purposes."

The move comes as the industry as a whole looks to move away from GHG-producing fossil fuels as part of its IMO 2030 and IMO 2050 emission reduction targets.

The development will be rightly welcomed as a positive step for the industry, but a key barrier for Marine Shipping is not the manufacture of engines that can operate on such fuels but producing the fuels at scale in a way that does not generate GHGs.

Future Proof Shipping has not revealed from where it will be sourcing its fuel, but so-called "green" hydrogen - fuel that produced without generating GHGs - is unlikely to be available as a bunker fuel at scale in Northwest Europe by the end of this year.

After the retrofit the ship will resume operations between Rotterdam and Antwerp.