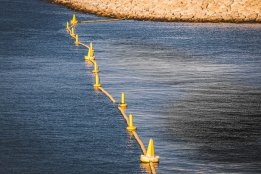 A collision between a bulk carrier and a smaller ship resulted in a bunker fuel spill off the coast of Sakhalin.

According to marine news provider Maritime Bulletin, the lighter struck the larger ship in the fuel tank area, an action that resulted in the spill a few days ago.

Oil booms were deployed and a clean up operation is underway although the amount of bunker fuel spilt was not reported.

According to the International Tanker Owners Pollution Federation, there were no spills from ships over 700 metric tonnes last year and three incidents where betwen 7 and 700 mt of oil were spilt.

The total volume of oil lost to the environment from tanker spills in 2020 was approximately 1,000 mt, according to ITOPF.

The two firms are cooperating to develop what they call Ship Integrated Photovoltaic Systems.

The company announced the plan as part of its new strategy for the next five years in an emailed statement on Wednesday.