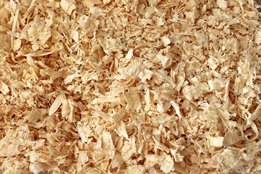 Biomass such as sawdust could be used. File Image / Pixabay

The move is noteworthy as it would represent the first refinery to specifically produce marine fuel from the bio oil.

Pyrolysis oil is produced by heating biomass (the firms suggest sawdust or roadside grass cuttings could be used) which can then be processed into a liquid fuel. Compared to more typical biofuel production routes, the process is considered to be a more complex but potentially more cost effective.

The pair say they will create a new company called BTG-neXt and build a pilot refinery with a production capacity of 1,000 tonnes/year in order to demonstrate that continuous production is feasible.

While that amount is tiny in bunker industry terms (the average stem size in Singapore last year was 1,262 tonnes) BTG CEO, René Venendaal, says it "is sufficient to demonstrate that the technology works and will serve as a basis for further scaling up our operations."

The pilot is estimated to require a six-figure investment and will be built "as close to home as possible".