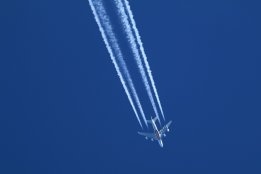 The environmental impact of ship pollution in the open seas is the subject of a new study.

When results were compared with ships measured in the English Channel (where emissions are controlled through regulation), the amount of particulates was significantly reduced compared to the open ocean.

Particulates, which comprise soot and sulphates, have long been known to alter the behaviour of clouds in the open ocean, creating lines of brighter clouds behind ships that can been seen from space, a phenomenon similar to contrails often seen behind aeroplanes.

Prior research tended to be laboratory-based or based on territorial water or ports where controls are already in place.

With data harvested from field work on a research aircraft flying directly through the exhaust plumes of cargo ships in the busy Atlantic shipping lanes off the Portuguese coast in 2019, the results are closer to what is actually happening, the university has said.

Next year, ACRUISE will return to repeat the measurements to assess how much of an impact the new controls have made. These will be combined with satellite data and atmospheric models to determine how much of a change this has made to air quality and climate.

The contract includes the option for three more tankers.

Former Trefoil COO Elfrink: Exit Was Not an Easy Decision

But made in order to "start a new adventure" within the industry.