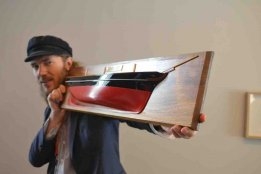 A Dutch shipping company is planning to build a sailing clipper to transport cargo emissions free.

Ecoclipper has started the project with a half-hull model of the prototype, which it hopes will form the template for its wind-powered fleet.

Company founder and sea captain Jorne Langelaan is behind the project. Langelaan is also a founder of sustainable shipping company Fair Transport.

A half-hull model harks back to the early days of shipbuilding.  Since the two halves of the ship were considered symmetrical, the model was deemed to suffice as the basis for the ship's design.

The company's new service allows its customers to rent battery systems from it.