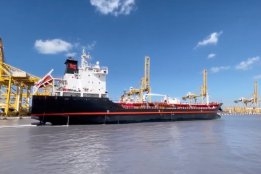 Monjasa today said it has acquired a 2009-built tanker from from Golden-Agri Stena that will be positioned as part of its Middle East operations.

Formerly known as the GS Adventure, the Monjasa Server is a 9,600-dwt capacity vessel with five tank segregations allowing for multiple fuel grades onboard.

"Capacity-wise she matches demand for transporting oil cargoes from the Fujairah bunkering hub to Monjasa's main markets across Dubai, Abu-Dhabi and Sharjah ports, as well as performing ship-to-ship refuelling operations," the company said.

Despite the well documented decline in global volumes this year, Monjasa says its sales have been rising.

"During the past years, we have actively pursued additional ownership of the supply chain through an increasing percentage of owned tonnage across our fleet. We have seen how the IMO 2020 sulphur cap sparked further market interest in how the new fuel products are being sourced, shipped and supplied," said group CEO Anders Østergaard.

"This most recent acquisition fits well with our ambitions and matches market demand in terms of cargo capacity and high technical specifications."

The firm's operations across the Middle East currently consist of four tankers ranging between 4,000 and 10,000-dwt, and for 2019 Monjasa said it supplied 600,000 tonnes of marine fuels in the market – equivalent to 13% of Monjasa's 4.5m tonnes total volume for that year.

Overall volumes for this year are likely to be up around 10%, according to Ship & Bunker estimates, with the firm's Rasmus Jacobsen, managing director for Monjasa in the Americas, in September saying it has been able to grow its market share in every month of this year despite the effect of the COVID-19 pandemic on the global economy.

Seafuels will use the bunker barge Awanuia to deliver VLSFO and MGO produced by BP.

The company will be taking on the ship from next month.