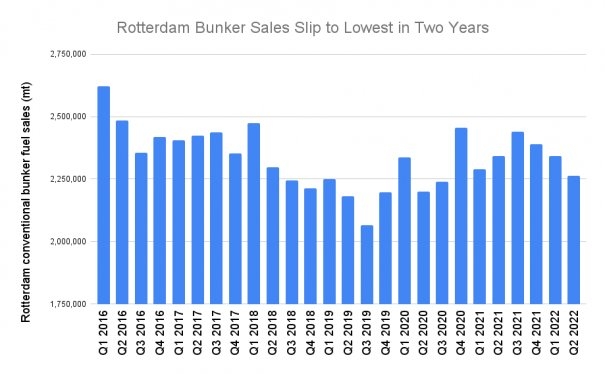 Rotterdam's bunker sales have been declining since the summer of 2021. Image Credit: Ship & Bunker / Data Credit: Port of Rotterdam

Conventional bunker sales at the Port of Rotterdam, the world's second-largest marine fuels hub, have slipped in the second quarter while LNG deliveries slumped.

Conventional sales excluding lubricants, LNG and biofuels reached 2.3 million mt in the second quarter, according to the latest data from the port authority, down by 1.1% from the same period a year earlier and by 3.4% from the first quarter of 2022.

The port authority also revised down its conventional bunkers total for the first quarter to 2.3 million mt, from 2.6 million mt previously.

Biofuel sales continued to climb overall. The port saw 160,020 mt of bio-fuel oil blend sales in the first quarter and 9,619 mt of biodistillate blend sales, up by 288% and down by 23.7% respectively from the same period a year earlier. These figures reflect sales of blends containing unreported ratios of biofuel and conventional fuel.

Oil Dips For The Day, Gains On The Week As Traders Sway Between Bearish And Bullish Sentiment

Meanwhile, Iran's return to the world stage is predicted for early next year.