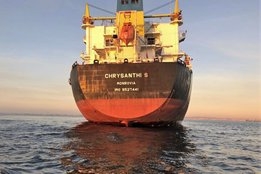 The South African Maritime Safety Authority (SAMSA) says it has launched an investigation into the cause of a spill during bunkering operations Saturday in the Algoa Bay area.

The incident happened off the port of Ngqhura near Port Elizabeth as SA Marine Fuels was delivering fuel to Panamax bulk carrier MV Chrysanthi S.

"It was reported that approximately 200 to 400 litters of fuel from the receiving vessel MV Chrysanthi S, flag state Liberia, was spilled into the sea as a result of overflow during the fuel transfer.  SA Marine Fuels proceeded to dispatch a commercial oil spill response service provider to mitigate and contain the spread of the spill," A Department of Environmental, Forestry and Fisheries' statement read.

"This incident is currently considered a Tier 1 level incident which does not require intervention from the national authorities as local resources are sufficient. The department will provide assistance if the incident escalates and requires it."

The incident follows concern in May that the addition of a third player in the market would increase the risk of bunker spills in the environmentally sensitive area.

The box ship operator had previously set a $200/mt surcharge applicable from December 1.