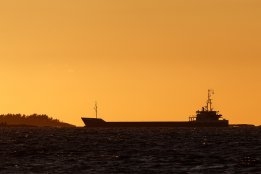 Russian shipping firm Sovcomflot has ordered five tankers that will have liquified natural gas as their primary fuel.

Speaking at a bunkering conference in Moscow, Sovcomflot president and chief executive Igor Tonkovidov said that the ships will ensure the company complies with International Maritime Organisation requirements by 2032-2039. He based his view on operational data taken from Sovcomflot's Green Funnel tanker fleet.

Two tankers from that series will be deployed from 2024 for ten years on the Sakhalin-2 project.

"If both ships use only LNG as a fuel as planned, [that should] reduce CO2 emissions by about 53,000 metric tonnes over 10 years, or by 29%, compared with using conventional aframax shuttle tankers for transportation of the same volumes on the same routes," Tonkovidov was quoted as saying by maritime news provider Port News.

The chief executive said that LNG remained an "optimal solution" for meeting IMO 2030 goals and that work towards reducing global greenhouse gas emissions from shipping in general should continue to progress.

"In spite of the energy crisis, technical progress is still on,"  Tonkovidov told the conference.

"We will not give up this work, we will continue moving forward."

In September the company undertook its first LNG bunkering operation at sea.

The port authorities will jointly consider which MFM systems should be used in the first half of next year, before then determining an implementation date.

If Maersk needs to increase its fleet size to make up for lost capacity from the agreement, it could accelerate its shift to methanol-fuelled boxships.