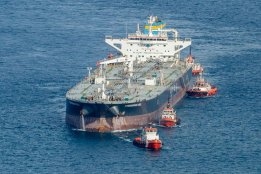 Marine fuel supplier Peninsula has reported a complex operation to refill its floating storage in Gibraltar.

Earlier this week the company refilled its floating storage tanker the Gladiator with tens of thousands of tonnes of fuel oil over a 30-hour operation, the company said in a LinkedIn post on Tuesday.

The Aframax tanker Tyrrhenian Sea brought the cargo from the Pembroke refinery in Wales, with four tugboats deployed to position and assist the ship. The operation was carried out at the same time as Peninsula was carrying out a bunker delivery with its delivery vessel the Hercules 400.

"We feel proud to see the efficiency, flexibility and the level of capacity of the vessels and the crews on both ships," Peninsula said in the post.

The company is looking for candidates with at least three years of experience as a bunker trader, as well as the right to live and work in Greece.