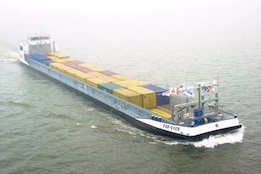 A "sustainable" drop-in marine fuel is being demonstrated on-board of the For Ever. Image: Nedcargo

Heineken Netherlands (Heineken), Nedcargo, and GoodFuels have launched a pilot project to demonstrate a "sustainable" drop-in marine fuel on-board of the For Ever – an inland barge dedicated to transporting beer from the Heineken brewery in Zoeterwoude to the deep-sea terminals in Rotterdam.

"In 2020 we want to have a climate neutral corridor between the Heineken brewery in Zoeterwoude and the Port of Rotterdam," said Pieter van Kooten, Logistics Manager for Heineken Netherlands Supply.

"This pilot is one step to realise the green corridor between the brewery and the Port of Rotterdam. We see GoodFuels' drop-in renewable diesel to play an important part in this transition."

The bunkers, which are supplied by GoodFuels, contain 30 percent biofuel, which is said to enable it to reduce CO2 emissions by more than 25 percent, as well as reducing emissions of nitrogen and particulate matter.

"The boat For Ever, transporting among others Heineken beer, is the best possible Dutch transport icon to introduce our drop-in sustainable marine fuel in the inland waterway transport – which is a key target segment for us," said Dirk Kronemeijer, CEO of GoodFuels.

Emission reductions from the fuel compared to conventional bunkers will be monitored in real-time during the pilot using Blueco's Konnexus system for remote monitoring.

"This is where Nedcargo again goes the extra mile to address the need of our client HEINEKEN Netherlands to achieve its green ambitions. It underlines our commitment towards offering our customers sustainable logistic solutions," Bert van Grieken, Director of Multimodal Nedcargo.

In December, Ship & Bunker reported that Astrid Sonneveld, director of International Business Development Marine at GoodFuels said drop-in biofuels could account for as much as 10 percent of the global marine fuel mix by 2030.

The Shell-chartered 170,000 m3 LNG carrier Methane Patricia Camila tested the system at various speeds during normal operations after its retrofit in October 2020.