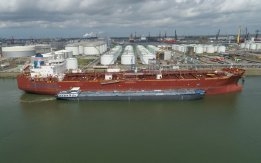 The demonstration bunkering was carried out on Tuesday. Image Credit: Port of Rotterdam

Methanex subsidiary Waterfront Shipping carried out a demonstration of methanol bunkering at Rotterdam on Tuesday, with the aim of showing a shift to the alternative fuel should be feasible from an operational perspective.

The company arranged the bunkering of its chartered ship the Takaroa Sun with methanol from the barge MTS Evidence, operated by TankMatch, the Port of Rotterdam said in a statement on its website on Wednesday.

"When appropriate safety measures are followed, we know that methanol is safe to ship, store, handle and bunker using procedures similar to conventional fuels.

"Today's methanol bunkering demonstration is another step in helping the shipping industry with its journey to reduce emissions."

Waterfront has recently ordered an additional eight methanol-fuelled ships for delivery between 2021 and 2023. Its methanol-fuelled ships currently run on methanol produced from natural gas, with no significant improvement in environmental performance versus conventional bunker fuels, but could use green synthetic or bio-methanol once it becomes commercially available.