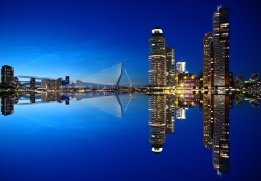 Conventional bunker sales at Rotterdam, the world's second-largest marine fuels hub, were essentially flat last year having declined just 0.5% overall in 2021 after a year-on-year decline in the fourth quarter.

Total conventional sales excluding marine lubricants slipped by 3.6% on the year to 2.4 million mt in the fourth quarter, according to the latest data from the Port of Rotterdam, while rising by 2% from the third quarter's total.

Readers should keep in mind there is a margin of error when measuring bunker volumes, which even for mass flow meters (MFMs) is +/- 0.50%.

But while conventional sales were disappointing at Rotterdam last year, the Dutch port continued to take a leading role in the alternative bunker fuels market.

The port also started recording biofuel sales last year, with the annual total reaching 301,051 m3. These are biofuel blends with an unreported ratio of conventional fuels to biofuels, and the conventional elements of these blends are not recorded in the port's total conventional sales.

Move is being billed as the world's first carbon-free bunkering network.