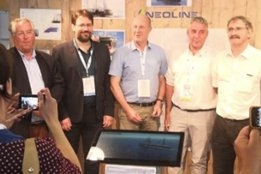 France-based Neoline says it has selected Neopolia S.A.S. to build two innovative wind-powered cargo ships, with construction set to begin at the end of this year.

The future shipowner says it is eyeing a 2021 start date for to launch its wind-powered shipping service using the ro-ro sailing vessels.

As previously reported, the first line will connect Saint-Nazaire in France, the US Eastern seaboard, and Saint-Pierre & Miquelon in Canada.

The vessels aim to reduce bunker consumption and, critically, the associated emissions by 80-90% compared to a conventionally powered vessel.

Car manufacturer Renault has already shown interested in using such a service, and last year signed a three-year partnership agreement with Neoline.

The city-state's total demand fell to 3.9 million mt in September.

Merrild had served as chairman for the past ten years.