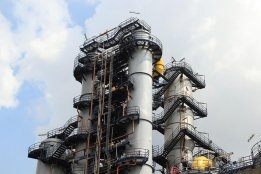 If ammonia is to become a bunker fuel of choice for shipping it faces a "huge task ahead," according to Ajay Singh, a director with Japan's Mitsui OSK Line.

Singh was speaking in a panel debate at the Argus Green Marine Fuels event being held in Rotterdam.

The conference heard that the biggest constraint against the alternative fuel entering the bunker maintream was the carbon emissions associated with its production.

But if producers adopted blue and green ammonia for bunkering purposes [thereby facilitating take up],demand would rise from its current low base to around 250 million metric tonnes annually.

The conference was told that current traded market for ammonia is around twelfth of that figure at around 20m mt a year.

Oil Up Again On OPEC Disappointment As $150 Prices Are Forecast

Meanwhile, Western Canadian Select takes a nosedive due to Russia.