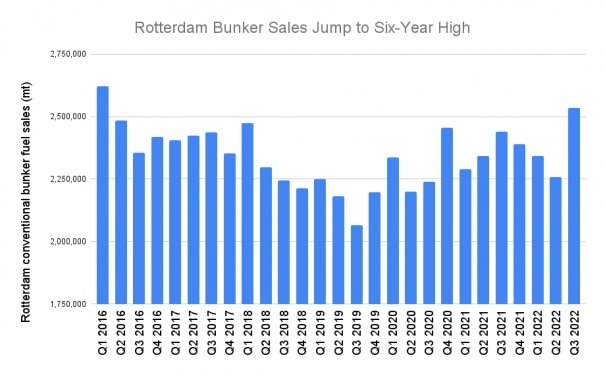 Conventional bunker sales at Rotterdam, the world's second-largest marine fuels hub after Singapore, jumped to the highest level in more than six years in the third quarter after a surge in HSFO demand.

Fossil bunker sales excluding biofuels, LNG and lubricants, reached 2.54 million mt in the period from July to September, according to the latest data from the Port of Rotterdam. The figure was up by 12.3% from the previous quarter, by 6.2% from the same period a year earlier and the highest quarterly total since the first quarter of 2016. 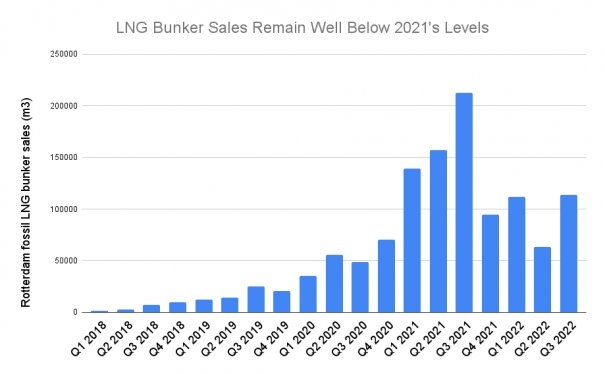 The LNG bunker market at Rotterdam remained lower than last year in response to recent high prices, but rallied on a sequential basis in the third quarter as those prices came off record highs. The Dutch port saw 113,701 m3 of LNG bunker sales in the third quarter, down by 46.5% from the same period of 2021 but up by 79.1% from Q2's level.

Biofuel sales continued to climb overall. The port saw 183,474 mt of bio-fuel oil blend sales in the third quarter and 9,301 mt of bio-distillate blend sales, up by 346.7% and down by 11.9% respectively from the same period a year earlier. These figures reflect sales of blends containing unreported ratios of biofuel and conventional fuel.

MPA Reports No Spill From Grounded Tanker in Singapore Strait

The Djibouti-registered tanker Young Yong came aground off Takong Kecil in the Singapore Strait on the evening of October 26.