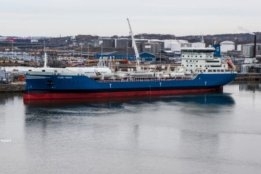 The vessel is due for delivery in the first quarter of 2024, and will use the system while calling at Gothenburg. Image Credit: Furetank

Swedish shipping firm Furetank has been awarded government funding to install a shore power connection on one of its tankers.

The company has been granted funds by Sweden and the European Union's Klimatlivet initiative, it said in an emailed statement on Thursday.

The firm will install a 6.6kV shore power connection on board one of its tankers currently under construction in China, with the Klimatlivet initiative covering about half the cost. The vessel is due for delivery in the first quarter of 2024, and will use the system while calling at Gothenburg.

"The effort is important, as emissions in port can account for up to 20% of the total emissions from a tanker, in an environment that is often even more sensitive to pollution and noise than at sea," the company said in the statement.

"If ports offer electricity of sufficient capacity stemming from green and clean sources, the climate investment has the potential to reduce CO2 emissions by approximately 600 tons annually."

Shore power connections allow ships to use the local grid for their power needs while at berth rather than continuing to burn bunker fuel. These systems are being rolled out at ports across the world, and in particular in the European Union, as a means of cutting emissions from shipping.

The overall environmental benefit from the systems is reliant upon renewable power capacity being available in the local grid.

The firm has signed a deal with wind propulsion firm Bound4blue to install four suction sails on its bulker the Crimson Kingdom.

Meanwhile, the countdown for the Russian price caps implementation has begun.