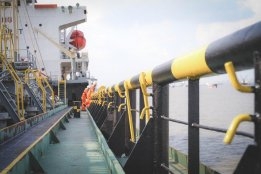 The European Union embargo on Russian oil refined products -- set to come in early next year -- could turbocharge the product tanker sector.

According to shipping analysts Frode Morkedal and Even Kolsgaard as quoted in Tradewinds, a small percentage shift in demand could have a significant impact in a tight market.

The analysts argue that if utilisation changes by 1%, LR2 [long range product tankers] numbers may fluctuate by $12,000 per day.

If the EU ban ends up shifting 1 million barrels per day of oil products to tanker journeys that are twice the usual distance, product tanker utilisation could go up by 6% or 7%.

"Most likely, the difference in diesel prices between Europe and Asia will limit how high rates can go, but if utilisation is increased by 7%, LR2 earnings might theoretically reach $250,000 per day," Morkedal and Kolsgaard were quoted as saying.

Refined products prices in Europe are being buffeted by a range of factors not least from the possibility of the US limiting product exports to Europe due to low gasoline and diesel stockpiles ahead of hurricane season.

But bunker players remain sanguine about the market outlook.The longer the Russia/Ukraine war goes on, the more the market seems able to adapt where supply has become less of a concern than rising prices.

"Players are getting used to a war state hovering over our heads and are only waiting for a good opportunity to be on water," a Mediterranean bunker player commented.

Maju 510 the first Singapore-flagged vessel to receive the Smart (Autonomous) Notation from the Singapore Maritime and Port Authority (MPA).

The company rightly notes it as an important milestone for the industry as a whole.