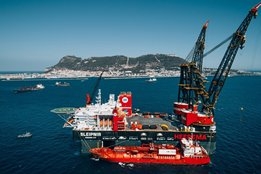 Gibraltar has joined the growing number of markets to see a vessel left LNG bunkers.

Titan LNG, whose vessel Coral Fraseri delivered the fuel, said it was the largest LNG bunker supply in Europe to date.

The LNG tanker was brought in specifically to deliver the LNG to the SSCV.

There are now 75 ports / terminals that supply LNG as marine fuel, according to the latest data from LNG bunker advocate group Society for Gas as a Marine Fuel (SGMF).

Energy giant Shell bunkered Carnival Group's cruise ship the Costa Smerelda at the French port on May 4 using its barge the Coral Methane.

With second gas bunkering operation and bunker barge to be deployed next year.