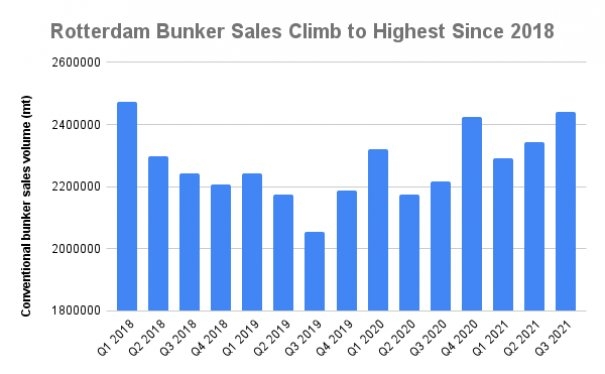 Marine fuel sales at Rotterdam, the world's second-largest marine fuels hub, climbed on both a quarterly and yearly basis in the third quarter to reach the highest level since early 2018.

Total conventional bunker sales excluding lubricants rose to 2.43 million mt in the third quarter, according to new Port of Rotterdam data released on Tuesday, up by 9.8% from the same period a year earlier and by 3.8% from the second quarter of this year.

The data show a healthier recovery for Rotterdam from the lows of the COVID-19 pandemic than seen at other bunkering hubs over the summer. Singapore's third-quarter volumes were 3.8% lower than those a year ago, while Panama's were 7.3% higher.

LNG sales at the Dutch bunkering hub continued to rise dramatically, gaining 338.6% to 213,250 m3, beating the total for all of 2020. The port authority also noted sales of a bio-LNG blend for the first time, totalling 531 m3.

Biofuel blend sales -- first noted in the data for the first quarter of this year -- fell slightly on a quarterly basis. Bio-fuel oil sales gained 0.7% from the second quarter to 39,410 mt, while bio-distillates fell by 15.7% to 10,214 m3. This is the total volume of biofuel blends containing conventional bunkers as well, with an unreported quantity of biofuel in each blend.

No methanol sales were reported in the third quarter, after a single 250 m3 stem in the previous three months.

The simulations are designed to help strengthen Sinopec staff's knowledge of the bunker business.

Four people are thought to have been injured in the explosion.