Tricks of the Bunker Trade: Magic Pipes, Concealed Bunkers, and 221B Surveys

At the present market rate, bunker cost is one of the largest operating expense incurred in a TC voyage. With such high costs involved, it becomes imperative for the charterers to know the exact bunker quantity onboard at the time of supplying bunkers.

What are 221B (or Bunker Detective) Surveys?

221B or bunker detective surveys are carried out by marine surveyors on behalf of the charterers to find concealed (hidden) bunker fuel onboard.

To find concealed fuel someone qualified has to go on board the vessel and get their hands dirty. In order to prevent fuel losses "Bunker Detective" experienced surveyors offer impartial, independent quantity measurement inspection services for marine fuels, issuing detailed bunker survey reports to confirm fuel delivery and report any bunker fuel shortages.

Why are they called 221B Surveys?

The term is derived from an historic reference to the fictional detective Sherlock Holmes' London residence where he ran his consulting detective business - 221B Baker Street.

How Bunker Fuel is Concealed?

There are many ways to conceal fuel on a vessel - some of the examples are:

Magic pipe is a terminology used when finding conceal bunkers. If used properly - to an untrained eye - it can be hard to detect and thus making bunker fuel disappear just like "magic."

These magic pipes are fabricated onboard by marine engineers and designed to fit tightly inside the actual sounding pipe. The bottom end of the magic pipe is closed and the pipe pushed through the fuel to the bottom of the tank. During sounding, the tank thus appears empty or gives false soundings.

Cost / Losses for the Charterer 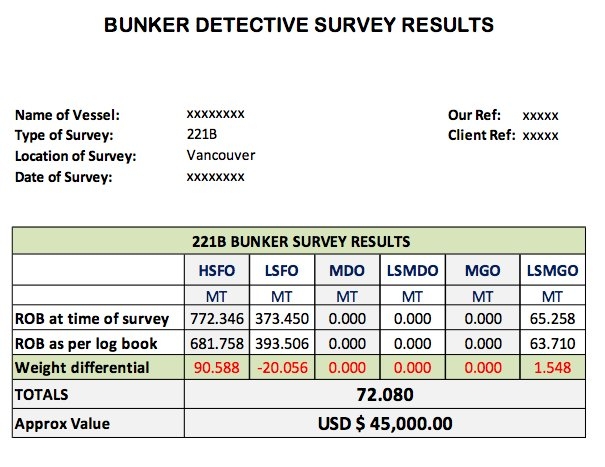 The two companies will collaborate to supply fuel oil at ports across Malaysia.

The organisation has seen a leaked copy of a draft European Commission proposal aimed at increasing the use of low and zero-carbon fuels in shipping.

BP's target for its own operations is net zero carbon emissions by 2050.