Tricks of the Bunker Trade: Can You Beat the Coriolis Flow Meters?

There are currently a lot of discussions taking place around adopting the mass flow metering system known as Coriolis flow meters (based on the Coriolis Principle - named after Gustave Coriolis, a French mathematician) in the bunkering industry to improve upon existing measurement technologies and to prevent fuel-pilferage.

In fact this week the Maritime and Port Authority of Singapore (MPA) confirmed that it intends to make the use of flow meters mandatory for bunkering in Singapore.

Thousands of vessels stem bunkers around the world every day and every now and then we come across news about bunker theft either by the supply vessel (bunker tanker or barge) as described throughout our "Tricks of the Bunker Trade" series.

In fact some in the industry have said it is difficult to make money through honest bunker trade.

Mass flow meters promise to prevent many of the current tricks employed by unscrupulous individuals. But can you beat the Coriolis flow meters?

What is the Coriolis Principle?

Note that Coriolis force is actually not a force but since the objects tend to veer to the left or right of its path, it is assumed that a force has acted upon it to cause this deflection because of the Earth's movement underneath it.

A good example of this would be to consider an airplane flying from Madrid to New York. Both places share almost the same latitude - so it would make sense for the pilot to set a course due West (270°).

However because of the Coriolis Effect if constant course corrections are not applied the plane will probably end up somewhere in Canada (i.e. right to the intended path in the Northern Hemisphere).

A simplified explanation of how Mass flow meters are based on the Coriolis Principle work is as follows:

Imagine a jet of water e.g. from a pressure hose pointed straight ahead – the jet of water will move in a straight line but when viewed from a rotating reference the jet will appear to be veering to the right or left depending on the hemisphere. 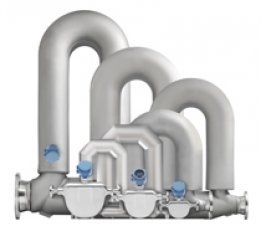 If the same jet of water was now enclosed in a measuring tube rotating around a fixed point with its axis perpendicular to the direction of flow of water; the measuring tube would appear to twist/deform due to the change in angular velocity from the Coriolis Effect.

However, it's not practical to make the tube rotate so instead, the tube is oscillated electromagnetically causing it to vibrate achieving the same effect as if the tube was rotating.

This twisting/deformation of the tube results in a phase difference (time lag) which is registered by use of special sensors and thus form the basis of the mass flow measuring in the system.

The mass flow meters come in different varieties – such as straight tube type, twin tube type, bent tube type – with each having its own advantages and disadvantages; however, discussion on these types is beyond the scope of this article.

The question we all face today is whether the Coriolis meters could be an alternative solution to existing volumetric flow meters (also called positive displacement meters) and manual measurements (where a bunker surveyor would measure the quantity of fuel transferred using the 'dip' method and look-up tables). 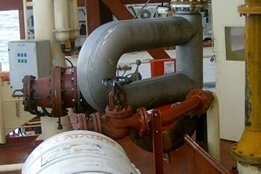 Flow meters are set to become mandatory in Singapore.

The issues primarily faced today are:

In conclusion Coriolis meters will definitely reduce the amount of bunker quantity disputes as these meters are less prone to tampering and can be used as an ant-pilferage tool in deterring cappuccino bunkers and at the same time increase the transparency during a stem operation.

The present method of manually gauging the tanks and calculations are of course not only more prone to error but also time consuming especially in an event of a dispute but when diligently carried out the quantity tolerance can be less than 0.1% most of the time.

As technology advances and mass flow meters are more perfected (quantity tolerance-wise) vessel operators and bunker suppliers will see tangible benefits in form of high level of transparency, efficiency and faster turnaround times for the vessel. Because everyone in this industry is well aware that in case of a major dispute a success of a claim will largely depend on the nature and the quality of evidence gathered at the time the supply is made.

Without detailed contemporaneous written evidence, the party affected is likely to lose the claim or it could be many years before the dispute is settled!

To achieve global acceptability manufacturers' may need to provide and install these meters at own cost on vessels and barges in order to conduct trials and document results. Some manufacturers' are already engaged in trials with ship operators and suppliers but more needs to be done in order to win the confidence and trust of the end users.

Unless the use of mass flow meters is mandated disputes could still arise. For example, a vessel is fitted with a mass flow meter but the barge is not and in case of a short delivery (caused other than the cappuccino effect or other dubious practices); the barge could still stand ground that the full ordered quantity was delivered!

What would you do in a situation like this? Therefore until such time, the use of mass flow meter should complement the existing method of manual surveying.

Lastly, even though often the buyers (ship operators) may be tempted to buy bunkers from those offering the lowest price per ton; they should continue to use only the most trusted and reliable bunker suppliers.

The firm has ordered four ships for delivery in 2024-5, with options for eight more.

By 2025 methanol-fuelled tonnage could represent 4.5% of Maersk's fleet by cargo capacity.