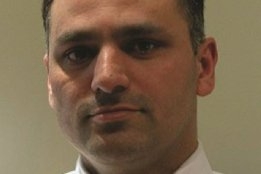 Recent external contamination of marine fuels from US Gulf area, once again, questions the integrity of supply chain of marine residual fuel bunkers. The early cases were reported to FOBAS at the start of April which led to the issuance of FOBAS bunker alert on 25th April.

All the ships reported malfunction of fuel injection equipment ( or specific components in common rail system) but not many ships reported filter blockings and sludge generation at purifiers however this is important information to steer further investigations into the quality of such fuels. 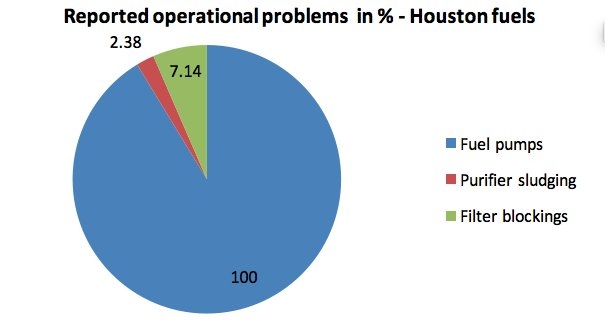 As the ships were mainly reporting malfunction of fuel injection equipment's so FOBAS started looking into the details of the machinery impacted. The data revealed that almost all major engine types were affected by the fuels supplied from US Gulf area. Furthermore the reported problems also included different fuel injection types i.e. both jerk and common rail fuel system. These initial findings by FOBAS did put us on right track to focus on fuel quality as main suspected cause of reported operational problems.   Linking the quality of fuel with reported problems/damage is not that straight forward. And for this very reason alone it is of critical importance for the ships to give as much details, no matter how trivial they think the information is, as this information helps assigning suitable test methods.

FOBAS is investigating approx. 50 cases of suspected external contamination of marine fuels loaded from different US Gulf ports in the last three months. The list of effected ships includes different types/sizes of ships. Almost all of the effected ships noted sticking of fuel injection pumps, accelerated wear on fuel injection pumps and sticking/accelerated wear on fuel injection system components in case of common rail fuel systems.  FOBAS data suggest that the effected ships were fitted with different engine types including all major manufacturers of engines for marine applications. This is important finding which strongly suggest fuel as main cause of all these problems/damages. Back in 2007 same sort of chemical contamination epidemic occurred however at that time FOBAS data revealed that certain engine types were more sensitive to chemical contaminations than others.

Once machinery side if ruled out as a cause of problem FOBAS focussed on to understand the nature of acid present in the fuel and thus GCMS and FTIR techniques were used on acids extracted from fuels.  Interesting thing about the US Gulf problems are that the bunkers loaded from this area all were having acid number (TAN) at low levels i.e. from 0.14 – 0.97 mg KOH/g.  Histogram of acid numbers of problematic bunkers is given below: 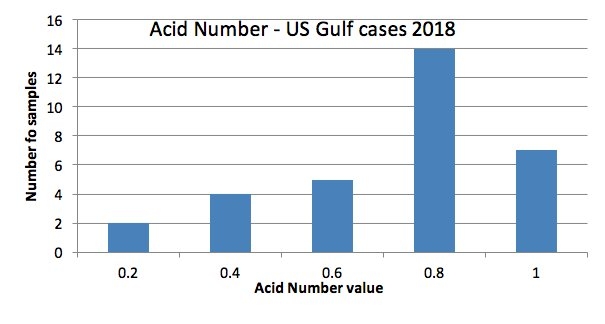 The data of the detailed examination of suspected fuels suggest that these fuels contain over 40 contaminants which are consistently found in almost all the fuels analysed recently when investigating reported problems. The numbers of contaminants detected and low acid number results means of the samples tested means that the range of acids detected were all to be present at low levels.
In order to find some relation between contaminants detected and the reported operational problems / damage , the data is grouped in two forms:

Firstly the contaminants were arranged by way of their contribution to the total contaminants detected. The list contains number of contaminants ( such as rosin acids and dehydro abietic acids and abietic acids)  which may prove presence of tall oil ( a by product of wood pulp industry), and  diethylene glycol) suggest the presence of solvents and whole range of other  fatty acids and chemical waste components. A large number of unknown oxygenates also contributing by 6% to the overall contaminants found in these fuels. Overall the distribution of different contaminants suggests a complex chemical waste components present in these fuels. 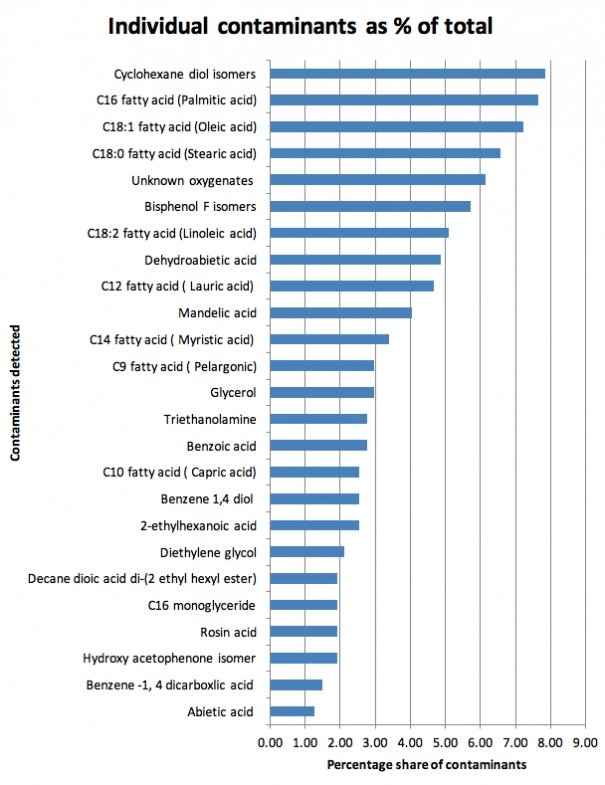 We must make it clear that no quantification of the detected components were carried out except a few and thus quantification data is not included here as the data is too small to represent true picture. Overall as stated before we did not find any component in very high quantities rather all components detected were present at low quantities. 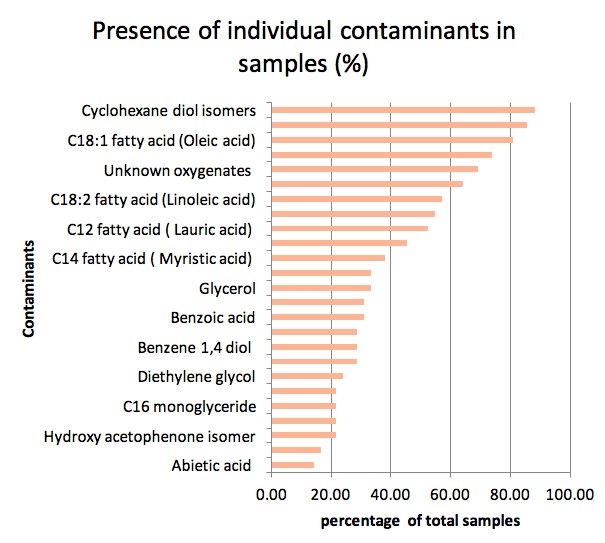 Furthermore infra red scan on the sample suggested small number of samples also contained atypical asphaltenes.  It important to note that asphaltenes are integral part of fuels molecular structure however on occasions FOBAS detected these special asphaltenes which are historically linked to filtration problems.  The main findings of IR scans are summarised in table below: 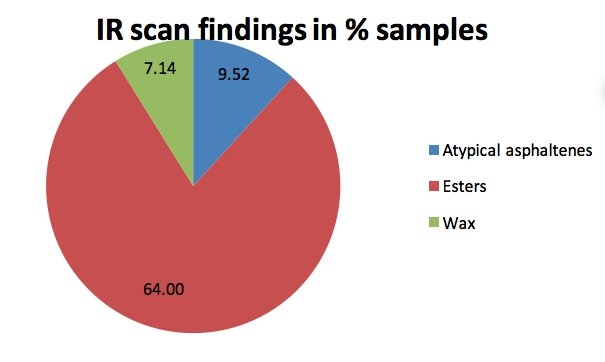 Fobas as active member of ISO working group responsible for formulating the standard always provide its research and developmental data to the working group to be considered for any observation to make. FOBAS believes in open innovation which benefits the marine fuels industry specially the end users of marine fuels and for this reason have undertaken few in-house studies to determine relevance of different test methods. In view of this, to investigate if the reasons for the reported filtration and sludging problems can be explained by any other test method than the total sediments test included in ISO 8217, FOBAS did an internal study to determine the validity of RSN test method regarding the stability of the fuel. As summarised in below graph FOBAS did not find any relevance of RSN with the recognised test method for stability of fuels. 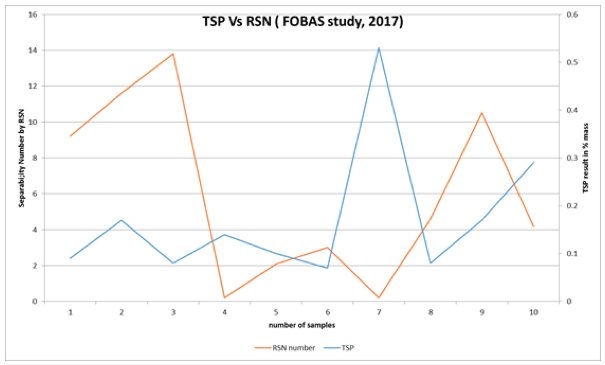 As is the case with chemical waste contaminations, there is no known scientific mechanism of damage is established to link any single component with the reported problems instead the data is of empirical nature. Empirical evidence is strong to suggest that the waste components found in the fuel caused the reported damage.

FOBAS has been on the forefront of research and development when it comes to the subject of external contamination. FOBAS has been and is an active member of joint contamination study which was aimed to first identify the marine fuels components by analysing different samples from cross globe to set a baseline as to what is expected in marine fuels.  As clearly residual fuels are waste products and thus are more prone to cross contamination than more refined products.  The second phase of this study way to single out the suspected problematic fuels and run some tests to understand its effects on ships machinery specifically fuel injection pumps. However this is extremely difficult to replicate the conditions of such high pressure and temperature in a rig. This  point is barring any further developments in this regards.

For ships the documentation record are of main importance as in all such cases the documents needs to prove that fuel supplied was the cause of the reported problems . The data records may include condition of machinery before and after the sue of suspected fuel, fuel transfer record to show only the suspected fuel is being used, operational data to ensure that machinery was running normal otherwise, fuel system checks data to show purifiers are working efficiently and more specific about engine and components maintenance record data  can help in fighting such case of quality claim.

External contamination of marine fuel is very broad term which simply means that the fuel does not contain anything except what is expected to be in fuel as marine fuel refining stream components.  When testing for external contamination of fuel two most important things to remember are: 1)  there is no single standardised test method which can detect all the contaminants in the fuel and 2)  all  such tests are mainly in house test methods and can differ in their results dependent on the knowledge, experience and quality of the chemist conducting and interpreting these tests.
Contrary to the belief of much in supply chain, this is important to mention here that ISO 8217 do recognise this complexity and does allow use of in house test methods to detect any external contamination.

ASTM 7845 has been developed to detect some main external components however industry experts have question sits viability to detect all contaminants that have been found in marine fuels historically. Nevertheless for the components included in the scope of ASTM 7845, this method may hold well to detect those contaminants only.

The recent cases question the validity of acid number test. Acid number test on its own , even at present, is not a guarantee that fuels with low TAN is free from problems . In recent cases its clear that even fuels with TAN as low as 0.14 have the potential to cause operational problems and/or component damage.  In view of this we propose to either lower the limit of TAN in ISO to ensure appropriate assurance to end user. However this suggestion needs further in-depth analysis of the data available on historic TAN values.  This suggested way may be good as a quick solution than developing a new test method.

The FOBAS data of investigations into the recent cases also supports the notion that it remains difficult to relate any specific individual contaminant with the operational problems when used on ships. Rather empirically it stands out strongly as evidence that certain specific waste components have the potential to cause operational problems of varying degrees and thus should be the basis of any quality debates in marine supply chain.  In these specific incidents, a group of 40 or so contaminants found in almost all samples that gave problems to different ships fitted with different fuel injection equipment /systems. We must highlight here that we anticipate the contaminants found in these fuels are not mixed with marine fuels in their pure form rather such a gross contamination may be a result of cross contamination, procedural errors or intentional waste dump.

As per MARPOL Annex VI port authorities have as role to play to ensure good quality of fuel is supplied from their jurisdiction by rigorous implementation of supplier's registration schemes. MARPOL Annex VI regulation 18 clearly lay down the requirements of fuel quality by stating that the fuel shall be free from any material that is harmful to machinery, environment or people.

FOBAS has never experienced external contamination of this scale where within span of few weeks in excess of hundred ships are affected and almost all ships reported same problems and as discussed before all have almost identical contaminants in the fuels tested.  FOBAS is happy to lead and facilitate working group of interested stakeholders to study these incidents in more detail with a view to assist with relevant bodies to minimise such risks. 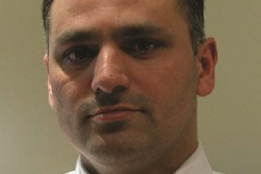 After graduation in marine engineering, Naeem started his career as a sea going engineer and qualified as chief engineer. During his career at Lloyds register the main areas of interest are sustainability of marine energy resources, techno-economic modelling for energy choices for ships, Key account management , conducting market research for alternative marine fuels/technologies, environmental legislations and compliance options and providing expertise on the fuel management issues.

He is also a member of Intertanko committee on marine bunkers, Energy Institute Joint sampling working group and represents UK on ISO working group working on standard for LNG as marine fuel.

We are a leading provider of marine classification services around the world, helping ensure that internationally recognised safety and environmental standards are maintained at every stage of a ship's life.

But we provide much more than traditional classification. We understand that in today's complex marine industry our clients are facing challenges to achieve the best possible performance from their assets and operations. We work closely with all industry stakeholders – shipowners, operators, charterers, designers, shipyards, equipment suppliers and port authorities – to support compliance with regulations, understand and manage the application of new technology and innovation, assess the risks of novel concepts and make them a reality, and achieve greater operational and energy efficiency through optimisation. Every service we offer is based on our technical insight and extensive experience, which means we can help our clients make informed decisions to improve performance and achieve their operating goals.

The average stem size surged on the year with healthy demand from container shipping.

The new plant may be operational by 2026.