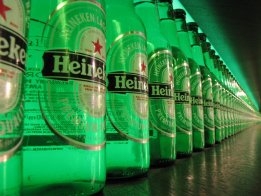 Global brewer Heineken will be in the market for carbon-neutral ships to transport its beer as soon as 2040, significantly ahead of IMO decarbonisation targets.

"We will work in close partnership with our suppliers and partners to reach our ambitious goal of a carbon neutral value chain by 2040," Dolf van den Brink, CEO of Heineken, said in a statement on the company's website on Thursday.

"We know that Heineken can only thrive if our planet and our communities thrive.

"Together, we will do our part to brew a better world."

The challenge for Heineken's shipping executives will be to secure a reliable supply of carbon-neutral ships for its goods over the next two decades.

The International Maritime Organization's target for the shipping industry is to halve its overall greenhouse gas emissions from 2008's levels by 2050, and to pursue full carbon neutrality as soon as possible after that.

With ships' commercial lives spanning around 25 years, the logic of this target is that some carbon-neutral ships will need to have entered service by the 2030s, but the number of them remains uncertain.

AP Moller-Maersk plans to have its first carbon-neutral ship, a 2,000 TEU container feeder vessel, running on green methanol in 2023.

Heineken has already made some progress towards its carbon goals for shipping, joining Maersk and Shell in a biofuel bunker trial in 2019.

The company has reduced its carbon emissions per transport work by 37% since 2008 -- almost reaching the International Maritime Organization's target for 2030.