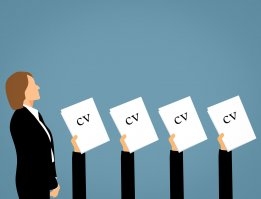 Job opportunities for bunker traders appear not to have become scarce so far. File Image / Pixabay

Despite a turbulent first half of 2020 for the bunker industry, the job market for bunker traders appears to be holding up well.

A wave of consolidation is expected to hit the industry this year -- one which was widely predicted in the wake of IMO 2020 in any case, but which will now be aggravated by the economic fallout from the COVID-19 pandemic.

But while companies in this industry may have a shaky recovery ahead of them, by and large bunker traders still appear to be able to find new jobs, several industry figures told Ship & Bunker this week.

"Many suspect it's a good time to recruit -- they're certain that things will turn around, the question is when," Vernon Jayanathan, director of the Maritime Recruitment Company, said Tuesday.

"If there's good staff out there, they're willing to take them on."

There has already been some movement in bunker industry jobs this year.

for those bunker traders that have lost their jobs, new ones do not seem too difficult to find for now

In February KPI Bridge Oil announced it would be merging with OceanConnect Marine. GP Global later said it had taken on OceanConnect's trading teams in Hamburg and Athens, after previously hiring new managers in the UK and US and launching a physical supply operation in Jebel Ali.

Sing Fuels hired a new deputy commercial director in London in February as part of an overseas expansion push. Newly formed supplier TFG Marine appointed a new CEO, but he subsequently decided to move on after a few months in the job. And most recently, it emerged that World Fuel Services had laid off about ten staff from its marine unit in the UK and elsewhere.

While it can't be said that there won't be any more layoffs this year -- and more companies do appear to be losing staff in some cases -- for those bunker traders that have lost their jobs, new ones do not seem too difficult to find for now.

"There's an influx of people coming on to the market who've been let go," he said.

"The biggest hurdle this group will face in any new position is not 'bringing in the numbers' as for many, this will be a given.

"Rather, it will be the challenge of being able to adapt to new company cultures.

"This is especially if they have been at one place for any extended period of time.

"To them I would respectfully ask them to persevere. Though they might find this period of adjustment challenging, I am convinced that if they wholeheartedly embrace this change, they will see this whole process as ultimately rewarding."

Søren Høll, CEO of KPI Bridge Oil, suggested candidates may be flocking to the larger companies in the bunker industry while the general trading environment remains unsteady, looking in particular for strong company culture with training and development programmes.

Even though we as KPI Bridge Oil are about to take on 60-70 employees to our group, we are still out there looking for the right ones

"I think, like with the IMO 2020 rule where we saw a number of clients looking for a safe haven, we tend to see the same thing on the trader side," Høll told Ship & Bunker Tuesday.

"Traders seem to be looking for a long-term commitment."

KPI has seen an increase in the number of applications for jobs there this year, Høll said, and is likely to hire more before the end of the year -- on top of the OceanConnect staff that are about to join the company.

"Even though we as KPI Bridge Oil are about to take on 60-70 employees to our group, we are still out there looking for the right ones and we have quite a number of interesting candidates that we are in dialogue with," he said.

Denmark-based global supplier Monjasa is looking in particular for candidates with a 'multi-disciplinary skillset', according to Svend Stenberg Mølholt, the company's chief operating officer.

"Ten years ago, a trader had to have a high degree of business acumen and be able to build relationships very well, but today you also need to be able to cope with an increasing level of complexity and understand issues such as sanctions compliance, KYC, and anti-bribery and corruption policies," Mølholt told Ship & Bunker by email.

"Back in 2017, we looked at what type of people would be needed to drive our industry forward and realised that it is very difficult to find them anywhere."

Monjasa is actively recruiting traders across all of its offices, in particular through its Monjasa Oil & Shipping Trainee programme, a spokesman for the company said.

Recruitment in the Shadows

Another recruitment specialist said that while posted job advertisements for bunker traders may be harder to find, there's still plenty of hiring going on behind the scenes.

"Since the beginning of the March there has only been a slight decrease in opportunity available in the market with the majority of bunker businesses hiring confidentially for the right candidate," Jasmine White, senior recruitment consultant for commercial shipping at Advanced Resource Managers, said Tuesday.

While a certain amount of hiring for the bunker industry has always been done privately, this mode of operations has increased significantly, White said.

"I'm still finding everyone is hiring, but they are not advertising this," she said.

"It's a more selective way of hiring, but since lockdown it has become only this."

Firm stresses to Ship & Bunker its good year, strong position, and a focus on existing vendors and customers.

Full hearing set for end of month in Singapore