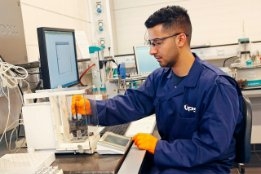 The recent 'bad bunkers' incident in Singapore has once again raised the importance of what it
means for a marine fuel to meet the ISO 8217 specification.

As most all of our readers will know, marine fuel is sold against the ISO 8217 specification. This
contains a table outlining the minimum and/or maximum values for several specific parameters
of marine fuel -- viscosity, density, water content etc.

Many consider fuel to be 'on spec' if a sample is tested and its various components
found to lie within the table's prescribed range.

Indeed, in its update on the recent contamination issue in Singapore, the origin of which was
identified as being from Glencore, the city-state's Maritime and Port Authority (MPA) stated
that "the contaminated fuel purchased by Glencore was in compliance with ISO 8217."

But to truly meet ISO 8217 the fuel must meet not just the table values but also a range of other criteria laid out within clauses of the specification's full text.

Perhaps the most important of those is that the fuel must be "free from any material at a concentration that causes the fuel to be unacceptable for use."

In the latest incident in Singapore it was noted that the fuel in question was contaminated by high concentration levels of Chlorinated Organic Compounds (COC), with about 80 ships
subsequently reporting issues with their fuel pumps and engines.

"By virtue of more than 80 vessels finding the fuel unacceptable for use and the MPA linking this to material (COC) at a concentration that has led to 'contamination', then it appears virtually by definition that the fuel is not in compliance with ISO 8217," the CEO of an international bunker company told Ship & Bunker via email on condition of anonymity.

A fuel can satisfy ISO 8217 testing, but not be Regulation 18 compliant

"For anyone to suggest that clause 5.2 can be ignored is a disservice to buyers of marine fuels.

"The real challenge with clause 5.2 is objectively defining 'unacceptability' and dealing with cases in which the fuel is acceptable when delivered but becomes unacceptable due to handling onboard.

"What we're seeing in Singapore is very different from these edge cases."

Steve Simms, Principal at Simms Showers LLP, notes that alongside the ISO 8217 specification there is also Marpol Annex VI Regulation 18. It requires, amongst other things, that "the fuel oil shall be free from inorganic acid" and "the fuel oil shall not include any added substance or chemical waste which jeopardizes the safety of ships or adversely affects the performance of the machinery."

From a claims perspective, this distinction is obviously critical.

This year's incident in Singapore draws many parallels with the 2018 'bad bunker' incident originating in Houston that affected over 200 vessels.

There will now be suits coming out of the Singapore situation

Among the similarities is that many -- incorrectly -- considered the faulty fuel to have met the ISO 8217 spec, as it typically satisfied the ISO 8217 table parameters.

"But the buyers of those contaminated bunkers were entitled to make a claim as the fuel did not meet the full text of 8217 -- it was not fit for use," Simms said.

"Today there are still a handful of cases going on involving the Houston 2018 problem.

"There will now be suits coming out of the Singapore situation.

"One of the questions will be about the source of the COCs."

With the industry having witnessed two major contamination issues in recent memory, it naturally raises the question of whether testing to 8217 specification is enough.

For many, it is not, and they are now requesting a more advanced analysis of their fuels be performed, specifically, the use of gas chromatography mass spectrometry (GCMS) testing.

So far in 2022, over 8.5% of GSMS-HS screening tests have shown a "Caution" result, indicating a significant presence of chemical contamination

The drawback is that GCMS testing takes more time to perform and is more expensive than basic 8217 testing.

To counter this, global testing firm VPS introduced a chemical screening service that utilises GCMS-Head Space as its detection technique.

"This approach is very similar to that adopted by the health agencies around the world when they introduced rapid antigen testing for COVID," Steve Bee, group commercial and business development director at VPS, explained to Ship & Bunker.

"If contaminants are detected then progressively more complex tests are applied.

"The pre-burn stage of testing can detect more than 70% of all chemical contaminants which could be found in fuel. This includes the likes of styrene, DCPD, indene, etc, but also the chlorinated hydrocarbons recently found within the Singapore fuels."

But even aside from major incidents such as that seen recently in Singapore, as the price of oil rises bunker buyers should rightly be increasingly cautious about the quality of their fuel.

There has long been a relationship between the price of oil and the quality of marine fuel; simply put, the more bunkers cost, the more quality problems are witnessed.

If the latest VPS data is any indication, this relationship continues to hold true within the IMO 2020 era.

"So far in 2022, over 8.5% of GSMS-HS screening tests have shown a "Caution" result, indicating a significant presence of chemical contamination," Bee said.

As well as offsetting the emissions from its own barges, Delta is now offering its customers carbon offsets to cover their bunker purchases and cargoes.

Once final distributions have been made, OW Bunker USA and OW Bunker North America will have returned about $23.5 million to their creditors.

But prohibition on provision of marine insurance services may stay.