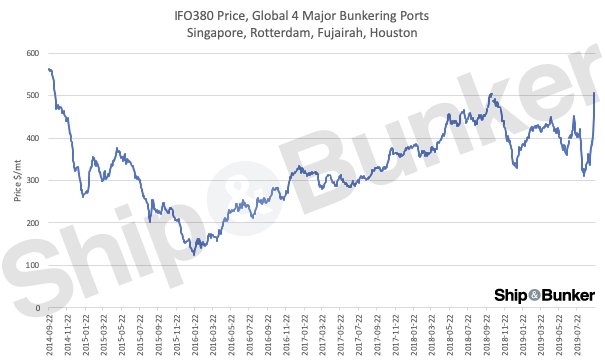 HSFO prices across major bunkering ports have bounced from a two-year low to a their highest in almost five years.

Ship & Bunker's Global 4 Ports Average index for IFO380, which tracks the average bunker price across the four major bunkering ports of Singapore, Rotterdam, Fujairah, and Houston, on August 15 was at a two-year low of $311.50/mt.

While last month's low was driven by what was seen as the early arrival of the end of HSFO, a subsequent tightening of supply in several key ports sent prices back up again.

This week's attack on Saudi oil facilities was then the driver for a final dramatic rise.

Highlighting perhaps the greater issue for bunker buyers is how wide the HSFO price spread remains between ports.

The cylinder oil will be available later in 2022 and is designed for mark 9 and above 2-stroke engines.

The vessel will be the first tug to be powered primarily using a battery system in the Tokuyama area upon its deployment in the first half of 2025.