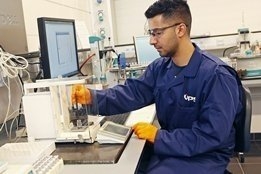 Based on its initial tests, bunker fuel testing agency VPS has delivered a positive assessment of the new IMO 2020 compliant 0.50% sulfur fuels.

"Large shipowners have already been sending us the new 0.50% fuel sample test blends, which they are getting ready to use," Rahul Choudhuri, VPS managing director for Asia, Middle East and Africa said at last week’s Wilhelmsen Ship Management seminar in Singapore, as quoted by Platts.

“The density and viscosity [of the fuels] that we have tested so far are in a good range. We think it will be something like 180 cSt fuel oil.”

Much has been made of the potential problems the new 0.50% fuels may have, and despite the positive attributes of the fuels VPS still recommends rigorous testing to ensure stability and compatibility.

Indeed, much has been made of the the fact it it unlikely there will be a high degree of cross-compatibility between the various 0.50% fuels, so much so that when ExxonMobil revealed its range of IMO2020 fuels last month, global compatibility was its headline point.

While the 0.50% global sulfur cap on marine fuel comes into force from January 1, 2020, the industry's transition to the new fuels is expected to take place next year.

Latin American country's two-ocean access is an advantage when it comes to fuelling shipping.