INTERVIEW: 'When It's Quite Windy Out There, Bunker Holding Excels' 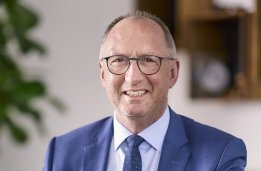 Bunker Holding, the world's largest marine fuels firm, is relying on turbulent market conditions this year to bring in more customers as smaller competitors face shakier prospects in the wake of the Russia-Ukraine crisis.

On Thursday the company reported the second-highest profits in its history, with pre-tax earnings gaining 47% and delivered volumes climbing by 3% in the year to April 30.

It has been -- for all of us in the industry, and our clients -- a very turbulent year.

The aftermath of Russia's invasion of Ukraine has driven bunker prices to record highs and seen margins improve as the industry faces uncertain supply prospects if Russian oil is phased out of the global market. But these record prices are also tightening access to credit in some areas, and the largest firms may be seen as a safe haven by buyers.

"I am indeed very happy," Keld Demant, CEO of Bunker Holding, said in an interview with Ship & Bunker on Thursday.

"It has been -- for all of us in the industry, and our clients -- a very turbulent year.

"It's another testimony to the fact that when it's quite windy out there, Bunker Holding excels."

Moving on From Sanctions Case

The strong earnings came despite a difficult year for Bunker Holding in which the company faced a sanctions court case in Denmark.

In December Demant was sentenced to a four-month suspended prison sentence, subsidiary Dan-Bunkering was fined DKK 30 million ($4.6 million), as well as having profits of DKK 15 million confiscated, and Bunker Holding was fined DKK 4 million for EU sanctions breaches over jet fuel trades in the Eastern Mediterranean in 2015-2017.

No doubt a lot of learning has been taken on, and we try to improve every day.

The firm is now seeking to learn its lessons from the case, and is continuing with reform of its compliance procedures that was already under way before the case started, Demant said.

"The last latest work that we have done on compliance had nothing to do with the court case; it was initiated before we knew that the case would come up," he said.

"But of course, having had the verdict, we will every day work on becoming an even better company.

"No doubt a lot of learning has been taken on, and we try to improve every day." 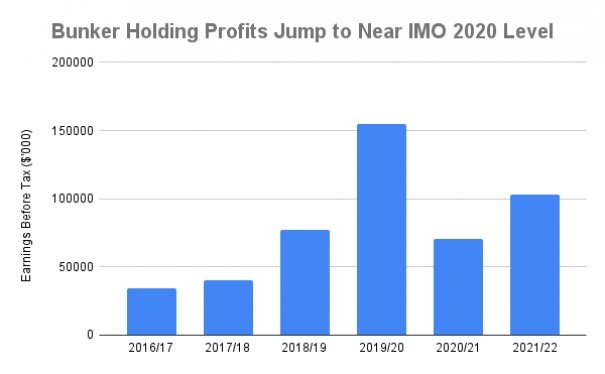 Where that extra $32.7 million in earnings for last year has come from remains something of a mystery for now. Thus far of the Bunker Holding units only Dan-Bunkering and KPI OceanConnect have released individual financial statements for 2021/22; Dan-Bunkering's earnings before tax slipped by $4.2 million on the year, while KPI gained $0.3 million.

The increase is coming equally from the trading, the physical and the risk management.

Physical supplier Bunker One is likely to take up a significant share of the Bunker Holding earnings, but it did not release an individual results statement in 2020/21. Hedging firm Global Risk Management and hybrid trader Glander International Bunkering are also likely to have a large role in the overall Bunker Holding books.

"I never comment on the units; there's a CEO for each unit, and they decide if they want to put out a press release," Demant said.

"But I can say that the increase is coming equally from the trading, the physical and the risk management.

"It's all of our units that have delivered quite strong results."

The growth was also fairly evenly distributed around the world, Demant said.

"It's not from a particular region; if we look overall it's growth in Asia, EMEA and the Americas," he said.

Demant highlighted the credit situation as a sizeable problem for the industry this year. Global average VLSFO prices in June have been roughly double the level seen in June 2021, according to Ship & Bunker's G20 index, and the amount of working capital made available to the bunker industry by its lenders will not have increased by anywhere near as much. That squeeze combined with the global environment of rising interest rates will put significant pressure on traders.

"Credit is for sure a real issue," Demant said.

"I've seen analysis saying that the oil price will most probably stay ahead of $100/bl on Brent up to at least 2024.

We do hear and see every day in the industry companies saying 'no quote'; in other words, that they cannot offer the required credit line.

"There is no doubt that we do hear and see every day in the industry companies saying 'no quote'; in other words, that they cannot offer the required credit line.

"The longer this level will stay, the more it will become an issue for the players in the industry."

Bunker Holding subsidiary KPI OceanConnect recently told Ship & Bunker it was becoming more selective with the counterparts it chooses to extend credit to.

"When it is a more complex market, when we see higher prices, this kind of complexity calls for someone like Bunker Holding who can help, advise and still provide credit, even though it's a very high level," he said.

"So we do foresee that this fiscal year would be quite satisfactory also."

The current economic turmoil is also shaking up job markets across the global economy, with workers in most sectors becoming more demanding in their salary expectations and becoming more selective about who they work for. But Bunker Holding has not yet found difficulties in finding new staff, Demant said.

"It has been heated, but it has actually cooled down a little bit and we do foresee that in 2022, more people will be seeking a safe harbour.

"We do actually see an increase in the number of people approaching us saying, 'Could we become part of your organisation?'"

Acquisitions on the Horizon

The turbulence hitting smaller firms in the bunker industry could be seen as an opportunity for larger ones like Bunker Holding to grow through acquisitions. Demant said this was unlikely in terms of conventional bunker companies this year, but that acquiring a company focused on alternative marine fuels was a possibility.

"An acquisition of a traditional trading company is quite unlikely," he said.

An acquisition in new fuels is much more likely [than conventional fuels].

"There might be interesting opportunities out there, but an acquisition in new fuels is much more likely.

"For now we don't have any particular acquisition in the ordinary business in sight, but some opportunities might come up."

A range of types of firm involved in alternative fuels is being considered, Demant said, and for now Bunker Holding is focused on not overpaying to expand its foothold in these newer markets.

"We are working with both the physical and the trading side of this," he said.

"It's a period where there is a lot of focus on it, and what we need to make sure is that the price is realistic and is not driven by the overheated focus that there is on new fuels right now."