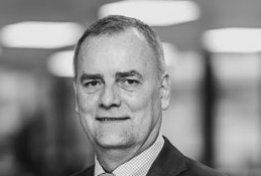 Marine fuels trading firm and brokerage KPI OceanConnect has seen a range of challenges in the conventional bunker market over the past year, but holds high hopes for its planned move into alternative fuels.

The company is upbeat about its performance over the year, CEO Søren Høll said in an interview with Ship & Bunker.

"We have seen a solid year; we have maintained our market share," Høll said.

It has been a challenging market, a volatile market.

"It has been a challenging market, a volatile market."

"We have mainly focused on maintaining our market share, while developing further and strengthening the new fuels and special projects division that we have built.

"Our auction site is starting to see even more traction now."

The firm lost a considerable share of its business by cutting off activity in Russia in the wake of the war in Ukraine, Høll said. Staff previously focused on Russia are now retraining on new markets to work in other parts of the business. The company had no local offices in Russia, but managed significant trade there from offices outside the country.

"Given that, I'm quite satisfied with the results," he said.

The company saw little change in demand on the year. Between calendar 2020 and 2021 Ship & Bunker and BLUE Insight's market survey of volumes in 17 key areas around the world found an average gain of 3.5%.

Indications at the start of 2022 that the company might take greater volumes worldwide were quickly replaced by concerns over price rises and credit allocation, Høll said.

"Globally for us it's been flat," he said.

Globally for us it's been flat.

"I had some expectations early on this year that we could increase our market share, but given the uncertainties in the market, especially after the price increases and so on, it's been more important to make sure that we have the right counterparty and the right assessment."

But the firm saw volumes surges of 63% and 20% respectively in Hong Kong and mainland China.

"In terms of the mix, it's about 80% low-sulfur and 20% high-sulfur, which has been quite stable over the past year."

The company is now much more sensitive to the financial health of the industry and individual companies after this year's record price surge and the ensuing impact on credit availability. Ship & Bunker's G20 Index of average VLSFO prices at 20 leading bunkering ports has been at an average of $1,088/mt in June, up from $545/mt in the same month of 2021.

"There's no doubt that the current price levels have created this squeeze that we have been taking about," Høll said.

"It is there now, and we see that there is a further need for credit again.

We see that there is a further need for credit again.

"With the financial strength that we have, we are well positioned on that part.

"Plus, basically since the 2020 transition we have been working closely with the partners that we have, and they have also recognised that even when prices we low we maintained the relationship.

"We have to admit, we are a bit more selective today, and the ones who worked with us when prices were low -- basically, not just for the credit -- are the ones we work closer with today.

"We see quite a number of new clients asking to be serviced by us, and we have to be very selective on this.

"So we see a tendency to some flow of requirements for further credit here, but we work with the ones who rewarded us with their business when prices were low, and that will continue."

The firm set up an alternative fuels division last summer, and plans further engagement in these markets this year.

"Moving into the new fuels is a completely separate chapter, and quite interesting," Høll said.

"I expect more in the future on this, especially this financial year.

"Short-term in this business is from today until tomorrow, but in the sense of new fuels, it's within the next eight to ten years; we have to be a bit patient.

"But there are some interesting developments in bio-gas and LNG at the moment, the infrastructure is in place and it gives some good opportunities."

In the short term we are looking at biofuels and LNG.

The company's role will primarily be as a trader in these deals, and as a broker in some cases.

"We won't necessarily be a physical supplier; we are an intermediary," Høll said.

"It's all subject to and depending on how the cooperation and relationship is structured with our clients, or our suppliers and vendors."

As part of the new division's launch the company also reported its first foray into carbon offsetting last year, and plans more activity in this sphere.

"What's important, of course, is to ensure that we have the right counterparts; it's important that we do good due diligence there and take it step by step.

The firm is cautiously optimistic about its outlook for the 2022/23 financial year, Høll said.

"We're at an early stage, but so far we are happy with the start we have had," he said.

"We are very positive on what we can develop with the partnership approach, the consultative approach we have with the new fuels; we will definitely see more traction on this."

So far we are happy with the start we have had.

The company is also hoping for further progress in its aims for a more gender-balanced and representative workforce. The firm has been running a 'Women in Shipping' campaign over the past year seeking to highlight the potential benefits from achieving a more balanced workforce.

KPI OceanConnect's own workforce includes about 40% women currently, the firm said last month. This includes 29% of its traders, 65% of its accounts and finance staff and 29% of senior management.

"We definitely believe that the more equal we are, including on gender, the more different perspectives we will get in the business, the more innovative we will be, and we will get into a positive trend to attract the right talents to our business," Høll said.

Quah Ley Hoon of Singapore's MPA to Step Down Next Month

Teo Eng Dih, currently deputy secretary for policy at the Ministry of Defence, will become chief executive designate from August 8.

The additional units will be installed on three post-Panamax bulkers are are expected to bring CO2 savings of 20%.