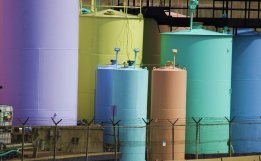 Preparing onshore fuel storage tanks for IMO2020-compliant fuels will lead to much 'problem solving' by tank operators later this year, a conference has heard.

Factors up for consideration include when to clear tanks, the cost of time out-of-service and when to stop offering high sulfur products.

Ships can use additives to clean out fuel tanks but the process can take months, according to Kevin Cote, marine technical sales manager for Innospec.

On the bunkering side of the equation, Ship and Bunker reported earlier this year that Singapore bunker operators predict a rise in the cost of delivering bunkers to ships as delivering a range of fuel increases turnaround times for bunker barges.

The group expects to publish an "independently conducted report" on the subject sometime in the first quarter of this year.