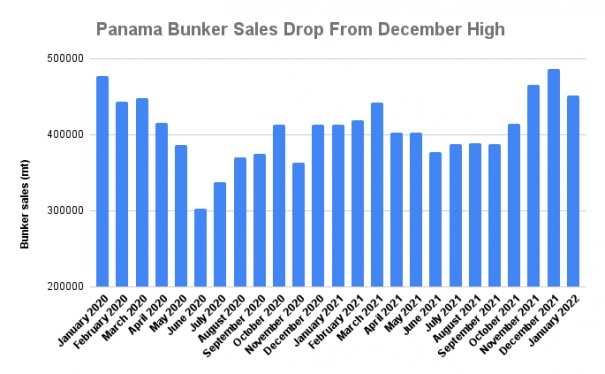 Bunker sales in Panama dropped sharply on a monthly basis in January, but remained well above the levels seen at the start of 2021.

Total sales reached 451,664 mt in January, according to preliminary data from the Panama Maritime Authority (AMP). The total was up by 9.2% from a year earlier, but was down by 7.2% from December's level.

Panama's sales were significantly more positive than those at the world's largest bunkering hub last month. Demand in Singapore in January fell by 10.4% on a yearly basis and by 3.5% on a monthly basis.

The firm has signed a deal with Yara to equip seven more tankers with the FuelOpt system.

U.S. Benchmark sinks to the $80s On Fears Of Global Fiscal Tightening

However, analysts believe oil prices will overall hold steady this year at about $101.

The two companies have announced a partnership in which StormGeo's s-Insight fleet performance management software will be rolled out across the Hansa Tankers fleet.