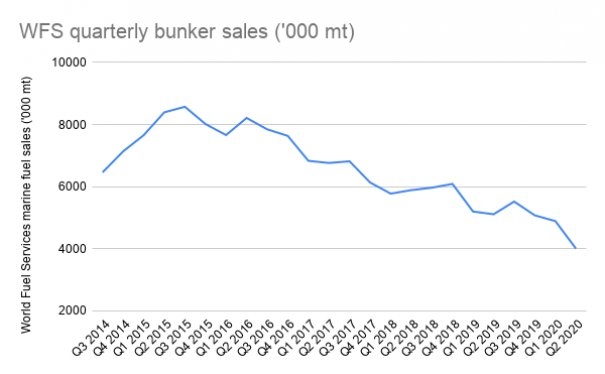 The company's bunker sales have dropped to the lowest level since at least 2014. Image Credit: Ship & Bunker / Data Credit: WFS

Fuel supplier World Fuel Services saw a small gain on the year in profits from its marine unit despite the impact of the COVID-19 pandemic, delivered at the cost of a six-year low in bunker sales and reduced headcount.

Gross profit from the company's marine segment was $37.2 million in the three months to June 30, the company said Thursday, up by 2.2% from the $36.4 million seen in the same period a year earlier.

The second-quarter figure is still down sharply from the $59.3 million seen in the first quarter, which was the highest quarterly gross profit in more than five years and up by 68% from the same period a year earlier.

The company said the better-than-expected performance of its marine unit was "principally related to improved performance in our core resale business, offset by significantly lower volume due to a decline in activity in connection with the pandemic."

The marine unit sold 4 million mt of bunkers in the second quarter, down from 5.11 million mt a year earlier and the lowest quarterly level since at least 2014. The company's bunker sales are now less than half the level they were at three years ago.

Our diversified business model produced a respectable result for the quarter.

"The resilience of our diversified business model produced a respectable result for the quarter despite volumes across all of our operating segments being negatively impacted by the global shutdown due to the COVID-19 pandemic," Michael J Kasbar, CEO of World Fuel Services, said in the statement.

"The continued demonstration of our value to the global supply chain and energy and logistics industries during these uncertain times will serve us well as the world begins its recovery."

In its first-quarter results the company had warned of a difficult second quarter ahead. WFS now expects to see these troubles continuing in the third quarter,

"Our results of operations during the second quarter of 2020 were significantly impacted as a result of the effects of the pandemic," the company said.

"Since the level of activity in our business and that of our customers has historically been driven by the level of economic activity globally, we generally expect these negative impacts to continue through the third quarter as the recent increases in COVID-19 cases have further delayed the reopening of various economies around the world."

As Ship & Bunker reported earlier this month, the company has recently laid off several employees in its marine segment. In Thursday's statement the company did not rule out further consolidation of its business.

"During the second quarter of 2020, we took additional steps and expanded the restructuring of our operations to include the rationalization of our global office footprint, including the transition of select offices to smaller or more cost-effective locations," the company said.

"While the ultimate duration and impact of the pandemic on our business and our customers' operations remains unclear, we will continue to seek additional opportunities to further enhance our operating efficiencies and reduce costs throughout the current crisis and eventual recovery."