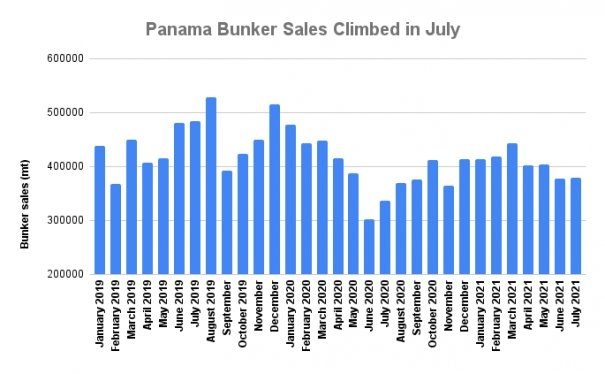 Bunker demand in Panama climbed on both a yearly and monthly basis in July.

Total sales rose to 378,710 mt last month, according to preliminary data from the Panama Maritime Authority (AMP), climbing from an 11-month low in June. The total was up by 12.4% from a year earlier and by 0.4% from June's level.

The AMP also revised its June data upwards, increasing the total by 5.1% from its preliminary estimate to 377,153 mt.

Global bunker sales are generally expected to see a faltering recovery this year from the lows of last year's COVID-19 crisis, with stops and starts in various parts of the world as lockdown measures are eased or tightened in response to infection levels. Bunker volumes in Singapore last month lost 2.3% from the same time a year earlier and by 1.2% from June's level.

The company is looking for candidates with at least five years of experience in a senior supervisory role at an oil storage terminal.

September's total was up by 3.4% from a year earlier and down by 0.2% from August's level.