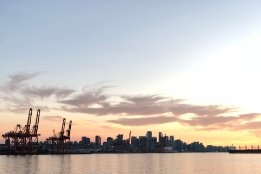 Marine marine fuel availability in Vancouver has become limited following the outage of a key pipeline in BC's lower mainland.

Closure of the 1,150-kilometre line was taken as a precautionary measure after the storm caused widespread flooding and mudslides across southern BC.

Some local sources told Ship & Bunker on Monday that there would be no avails until the pipeline reopens, while on Tuesday a Minerva Bunkering representative said that its supply was currently uninterrupted.

Pipeline operator Trans Mountain Corp. is currently inspecting the pipeline and is optimistic it could be restarted by the end of the week, local media reports.

"We want to look at the areas that we have identified over the many years as being potential risk areas, and get in there with our engineers and see what the status of those is," Trans Mountain spokesperson Ali Hounsell told local media.

“We are a critical piece of infrastructure and that’s why we’re working so hard to get back up and running.”

The firm has taken on the project in collaboration with MMA Offshore Limited.

The platform will focus on clean methanol as a future fuel.